At the opening of the Jerusalem Film Festival last night at the Sultan’s Pool, thousands of viewers had the extraordinary opportunity to see The Unorthodox, the debut feature film by Eliran Malka.

In addition, all of us who were there last night were able to honor Cinematographer, Yaron Sharf, who was presented with an award by Nechama Rivlin (wife of the President of Israel, Ruby Rivlin), for his contribution to Israeli cinema, especially for his work on this film and on many other Israeli films, including Someone to Run With (directed by Oded Davidoff, 2006) and Hunting Elephants (directed by Reshef Levy, 2013), both of which were screened at previous Festival opening events, similar to this one!

The film The Unorthodox (הבלתי רשמיים) is based on the actual story of the establishment and rise of the Shas political party (Sephardi Torah Guardians) from the1980s, until the party becomes a major force, especially in the election in 1999 when it garnered 17 seats in the Knesset. The anger, frustration, and disenfranchisement suffered by Jews of Sephardi (Mizrachi) background, at the hands of the Ashkenazi establishment and the orthodox religious Agudat Yisrael political party is depicted as the root cause of the explosion which leads to the founding and growth of this new grass roots political party.

Our main character is Ya'akov Cohen, played by Shuli Rand—one of Israel's veteran popular actors who became ultra-orthodox in his personal life-- in a tour-de-force performance. 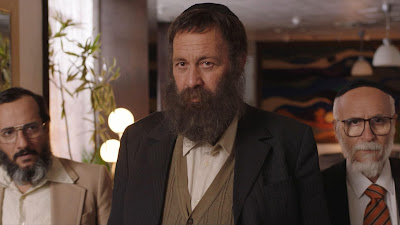 Ya'akov owns a printing press and is struggling to bring up his teenage daughter who is thrown out of a “good” (read that as Ashkenazi) high school for girls.  When he realizes that she has been expelled simply due to anti-Sephardi discrimination – there is no other explanation – then he decides to take matters into his own hands.  He envisions change through the establishment of Sephardi institutions, such as schools and yeshivot, all of which will be funded by the government, and he bands together with some friends who work with him to establish an ultra-orthodox Sephardi party that will run for Jerusalem municipal elections and ultimately for the Knesset.

The narrative is about a regular guy, a working man, who has no political experience, but has the vision and the passion to make a major change within Israeli society.  This part of the film is told with tremendous humor and understanding as we get to know Ya'akov and his friends.  On another level, the film is also about politics. The director clearly expressed much cynicism and criticism of the political process that Shas underwent as it became an established political party. It seems that politics, in Israel (and elsewhere!) forces people to play dirty and even to engage in corruption!  In my view, this part of the film is not as successful as the first part, but it is nevertheless insightful and helps to explain some of what has happened to Shas over the years.

In an interview with director Eliran Malka, this morning on Israeli radio Kan Reshet Bet, Malka explained that he identifies as a Mizrachi or Sephardi religious Israeli, but he does not see himself as ultra-orthodox.  He also said that he has tremendous respect for the Shas political party, and loves the story of its founding, which he thinks is unique, but he is intentionally critical in the film of how Shas has developed over the years.

The film provides an opportunity to understand the Shas voters, where they are coming from, and what they are expressing as part of their experience as a minority group which has suffered much discrimination over the years in Israel.  In addition, it provides insight into the workings of Israeli political life, demonstrating how  the "religious" leaders give up some of their ethical values and become poisoned by their new-found power and authority, which they abuse just like their fellow secular politicians.

The Unorthodox does not tell us much about the political platform for the Shas party, which has become well known in Israel for its concerns for "social issues", especially for the lower classes. This makes it a bit disappointing. On the positive side, using humor and pathos, the film is clever and upbeat and offers a compelling and fascinating story of one man successfully bringing about much needed social change.

I sit on the board of the Gesher Multicultural Film Fund and I am proud that we provided some funding towards the production of this film!


The film is distributed by Go2Films.