New Israeli feature film looks at racism within our society

The Cousin, directed by and starring Tzahi Grad, is a new feature film about relations between Arabs and Jews within Israel.

Naftali lives with his wife and two kids on a moshav in rural Israel. Naftali, an actor and filmmaker, is a bit of a naïve fellow, dreaming of drawing tens of thousands of Israelis and Palestinians into one-on-one encounters in order to advance the peace process.

Near his house he has a studio in an old cottage which badly needs renovations and he hires a young Palestinian named Fahed to do the renovations.  Fahed is a Palestinian of Israeli citizenship and Naftali explains the difference between a Palestinian from the Territories and one from inside Israel to his children. 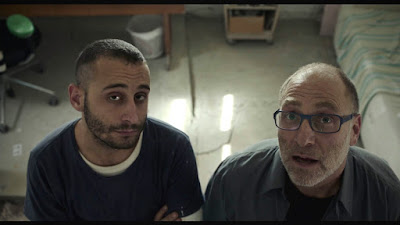 That same morning, a local girl is assaulted and, not surprisingly, the local police jump to accuse Fahed.   When Fahed is released on the cognizance of Naftali, members of the local community get together and decide to take matters into their own hands.

The film depicts Naftali as a moral person, one who cares about Arabs and wants to combat negative stereotypes about them. As the plot develops and the tension mounts, Naftali is threatened by his neighbors who pressure him to stop protecting Fahed. Although he is a compelling character, he is also beset with ambivalence. As things begin to spin out of control, we see how he blunders from event to event, and how he is especially caught off-guard by his wife’s mixed reactions to his attempts to protect his new worker.

Afraid of being too preachy and wanting to produce an entertaining film, the filmmaker misses the mark by concluding with a surprising and ironic twist which leaves the viewer asking what happened to the naïve optimism of our main character and wondering whether racist violence can be curbed in our society.

The Cousin was produced by Bleiberg Entertainment.
Posted by Amy Kronish at Wednesday, May 09, 2018