West of the Jordan by Amos Gitai

Amos Gitai is a prolific filmmaker – his filmography includes many award-winning feature films and also documentaries.  His latest film, which premiered at the Jerusalem Film Festival this past week, West of the Jordan River, is about the Occupation.  Framing the film with an interview with Yitzhak Rabin which provides a look at his strategy and his vision of moving forward with peace, Gitai sets out to interview a wide array of personages who are involved either politically or on a human rights level with issues dealing with the Occupation.

He travels with Ha’aretz journalist Gideon Levy to a tent of mourning in Hebron, he visits a Bedouin school near Kfar Adumim, and he attends meetings of the Parents Circle.  The resulting film unfurls a fascinating mosaic of a reality which simply must not continue!  According to a few of the people interviewed if the reality is not changed soon, the ongoing growth of the settlements and the terrible moral issues will cause a destructive future reality.

Amos Gitai says he was looking to make a visual diary.  But the film is more of a mix of interviews, many of them shot in a studio, combined with visits to many places in the West Bank, and some in the Gaza Strip.   We speak with Yuli Novack of Breaking the Silence who questions the moral price of the occupation and warns that we are losing the democratic nature of the state.

Even though the film is mostly about anti-Occupation activists, Gitai tries somewhat to be evenhanded -- not all of the interviewees are leftwing – there is a government minister who talks about the historic right of Israel to the land and Ben-Dror Yemini, a journalist from Yediot Achronot, who firmly believes that the Arabs don’t want peace and reconciliation. 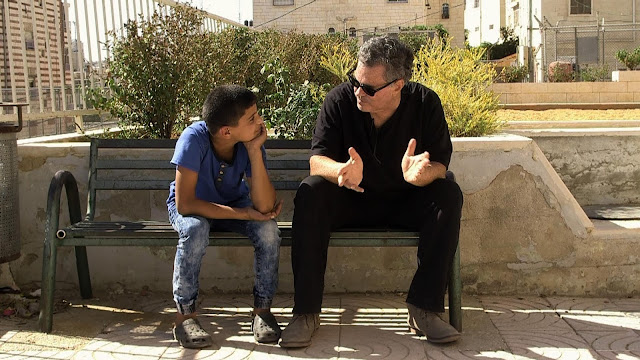 Together with Gideon Levy we learn that a 15-year-old boy has been killed by soldiers.  The Palestinians in the tent of mourning ask that Israel ends the Occupation and stops the killing of children – perhaps the greatest crime of all.

The scenes of women activists were most compelling for me.  We visit a woman’s group of the Parents Circle (Bereaved Parents for Peace) where we meet Roby and Bushra, both of whom have lost sons in the conflict.  Roby, one of the main activists of the group, and Bushra made a connection over their pain.  We also visit a meeting of B’Tselem, an organization which documents human rights violations, in which a group of Muslim women are being trained to go out with video cameras to document what is happening on a regular basis.  One woman says the camera “gives me strength.”  Another says, “Now they are afraid of us and they back away.”  Some of the footage shot by volunteers of B’Tselem of the soldiers’ treatment of local Palestinians is just shocking.

The film concludes with a backgammon tournament in which both Israelis and Palestinians are participating.  Is a shared Middle Eastern cultural background going to be enough?  How do we mobilize the masses of Israelis to stop the merry-go-round of apathy and in-action and to stand up and say “enough”!

West of the Jordan River (documentary, 94 minutes) is available from Sophie Dulac Distribution, or contact the Israeli production company d.elstner@docandfilm.com

Labels: --West of the Jordan, Occupation, Palestinians of the West Bank and Gaza