Everything is Broken Up and Dances, starring and directed by Nony Geffen, is a difficult film about a young man suffering from PTSD.  It is also about the strength and importance of friendship.

During the 2014 war in Gaza, Nony is called up to miluim (military reserve duty).  Riding into Gaza in a troop carrier, when asked why he still does miluim, the fellow sitting next to him says it’s for the “hevreh” – for his buddies.  And this is what the film is all about. 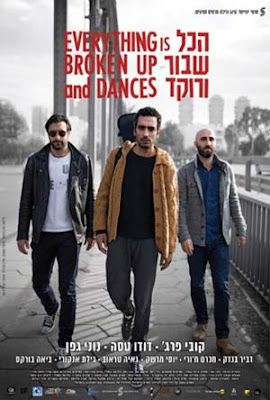 Nony’s troop carrier takes a direct hit and some of the soldiers in it are killed, but Nony survives, only to return home in the throes of a psychotic breakdown.  Although they have tried very hard, his parents despair of getting through to him and they agree when his friends offer to care for him.  It is Nony’s best friend, Rotem –- played by Dudu Tassa who is both a superb actor and singer – whose friendship helps to coax Nony out of his psychotic state.

Originally named for his uncle Amnon, a musician, who died fighting in the Yom Kippur War, Nony begins to take on the persona of Amnon.  Although it is not without controversy, his psychiatrist approves of this personality change as a form of shellshock therapy.  With Rotem’s help, Nony begins to live the life of this gregarious character and becomes a rock phenomenon appearing in a Tel Aviv pub to cheering crowds and groupies (including a young woman who becomes his hanger-on girlfriend). Meanwhile, the flashbacks of the terrible attack on the troop carrier persist in Amnon/Nony’s consciousness and in his dreams.

Athough not at all realistic (in fact, the premise is quite over-the-top), the film is well-scripted (the script was edited by Assi Dayan before he passed away), with great music and compelling characters. It provides us with some important insights into the lives of Jewish Tel Avivians who must cope with war and yet go on with life.  The songs, on the one hand, are about issues of life and death (“Don’t light a candle for me”) and, on the other hand, are about Israeli youth and their values.

Everything is Broken Up and Dances is distributed by United King.  Watch the trailer !

Nony Geffen’s feature debut film was Not in Tel Aviv, 2014.

If you are interested in the subject of shellshock -- two important Israeli films about shellshock were made back in the late 1980s – Shellshock by Yoel Sharon and Burning Memory (Resisim) by Yossi Somer.  More recently, the film Beneath the Silence also deals with shellshock. 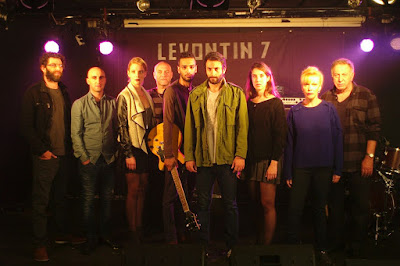 Labels: --Everything is Broken Up and Dances, feature films, music, shellshock, Tel Aviv