A moving period piece, An Israeli Love Story is an award-winning new and artistic feature film by Dan Wolman which offers a tragic, yet overwhelmingly compelling, story. It a romance between Margalit and Eli, set in 1947 during the tumultuous period of the end of the British Mandate.

Margalit is an 18-year-old young woman, living with her parents in Nahalal, a moshav in the Galilee.  (Nahalal is a well-known moshav due to its striking physical layout based on concentric circles and also due to the fact that this is where Moshe Dayan lived.) As a young woman, Margalit believes in the power of theater to make social and political change and she is intent on studying acting in Tel Aviv.  One day, she meets and falls in love with Eli, a fighter in the Palmach who is living on a nearby kibbutz, and she finds herself in the position of having to make serious choices in her life.

Eli is a complex character who must juggle a number of things that are important to him – his commitment to the socialist kibbutz way of life, his position as a young commander in the Palmach, and his new-found love for Margalit.  The true story of Eli, the son of Rachel Yanait and Yitzhak Ben Tzvi (president of Israel from 1952 to 1963), is the basis for the script. 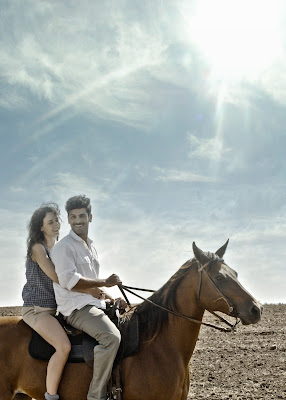 Last year, Dan Wolman was awarded a Life Achievement Award by the Israeli Film Academy (Ophir Awards).  He is a veteran Israeli filmmaker who has made a great many award-winning feature films, including Hide and Seek, The Distance, Foreign Sister, and Gei Oni – Valley of Fortitude.

As in many of Wolman’s previous films, An Israeli Love Story is a strikingly human portrayal set against the backdrop of an historical period, mixing a private story with the national narrative. This was a difficult time when people were called upon to make great personal sacrifices, and the fact that the film is based on a true story makes it particularly poignant and authentic. It is a subtle portrayal of a story with which many in Israel are already familiar.  Therefore, the script tells the viewer the tragic ending already from the beginning of the film.  This is a cinematic technique that permits the international viewer to have the same background knowledge that an Israeli film-going audience would have.

An Israeli Love Story (93 minutes) will open in cinemas in Israel next month, marking 70 years since the period reflected in the film – the period of the British Mandate, leading up to the U.N. vote for partition on November 29, 1947.  An Israeli Love Story is available internationally from Go2Films.
Posted by Amy Kronish at Tuesday, March 28, 2017