Ewa, directed by Haim Tabakman, is a period piece. 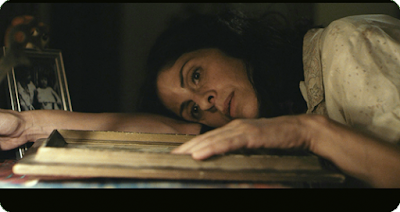 The story takes places in 1972 Israel in a rural setting.  It is the touching portrayal of Ewa and Yoel, who have already been married for a long time and have a grown daughter.  A Holocaust survivor, Ewa is a mysterious and lovely woman.  One day, Yoel learns that his wife has purchased an apartment in a nearby apartment complex where she is housing another man.  As a result of this discovery, their lives take a dramatic and surprising change of direction.

This is a slow paced yet touching love story, which brings to the fore one of the heartfelt problems encountered by Holocaust survivors after their arrival in Israel.

Ewa is the second feature film by Haim Tabakman, who is well-known for his first feature, Eyes Wide Open. The film (88 minutes) is available from Go2Films.
Posted by Amy Kronish at Sunday, November 13, 2016