The new Israeli feature film that everyone is talking about is Sand Storm (Sufat Hol), directed by Elite Zexer.  This film is about those Bedouin who live in small villages, many unrecognized, dotting the hills of the northern Negev.  Some live in shacks, and some live in small homes, all without basic infrastructure provided by the government.  Those who can afford it have generators which provide electricity for basic needs such as small refrigerators and washing machines.  This is a patriarchal and traditional society.

The film tells the story of a mother and daughter in one family within this closed society.  Layla, the oldest daughter, is attending a nearby college.  Her father obviously indulges her and, in the opening scene of the film, he is teaching her how to drive.  She is independent, bright, and in love with a lovely Bedouin young man from another tribe, whom she met at school. They want to marry. 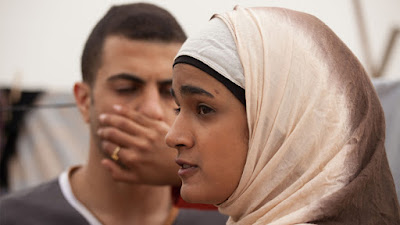 Her mother, Jalila, on the other hand, is suffering humiliation and unhappiness as she prepares the wedding feast for her husband who is taking a second wife.  The story of these two women, mother and daughter, provides the basic narrative structure for this film.

The dancing at the wedding celebration shows Jalila celebrating with a forced smile.  Because there are no men at this celebration, she is wearing a false mustache, creating a striking image.  But her face also shows a mix of pain, determination, and mostly worry about her daughter who she knows will never be permitted to marry the man she loves, a man from outside the tribe.
The characters in the film are compelling, even the father whose actions, in dealing with these two strong women in his life, are based on what seems to be at first unclear motivations.  It eventually becomes clear to the viewer that he is mostly conforming to what is expected of him and makes all of his decisions based on what other men in their world would say.

This is a gritty and authentic picture of life for the women, a hard-hitting emotional and psychological study.  These women live very difficult lives and they desperately need to believe that things might change for them and that their family conditions might improve.  You might think that the position of the new second wife is actually to be envied.  But the viewer gets a glimpse at her own humiliation at not having been able to catch a young husband who would make her his first wife.
Sand Storm was a prizewinner at the Sundance festival, and more recently, the winner of multiple Israeli Ophir awards, including best directing and best film, which makes this film the Israeli entry for the Academy Awards.  Debut filmmaker Elite Zexer was originally drawn to the world of the Bedouin of the Negev via her mother who is a photographer and had long ago made personal connections with this community.  Zexer is to be commended for her success as a Jewish filmmaker looking in at Arab society.  This film is a tour-de-force in its emotional power, effective script and visual strength.
Watch the trailer!