Through the Wall by Rama Burshtein

Through the Wall, directed by the religious filmmaker, Rama Burshtein, is a new comedy drama, an impressive film about providence, faith, matchmaking, and a woman’s desire for marriage, all on the backdrop of life within the haredi (ultra-orthodox) community in Israel.   Michal is a 32-year-old single woman, religious-by-choice, living within the haredi community and hunting for her intended already for many years.   She is obviously a unique person since she makes a living by traveling around in her little mini-van, taking her petting zoo to birthday parties.  This gives a quirky feel to the entire film!

When Michal’s new fiancé changes his mind about their engagement, instead of cancelling the hall and the wedding dress, she declares that her faith in God tells her that she will have a groom on the date originally planned. 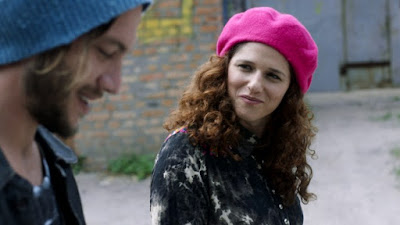 Of course, you can’t leave things to chance, or to God’s providence, you have to help a bit, and she sets out looking for her groom.  First she seeks out help from a religious woman who offers a superstitious ceremony in order to help Michal find her intended. Instead of becoming a ridiculously comic scene, it takes a turn for the serious when the woman forces Michal to admit what it is she’s looking for.  This scene provides a series of wonderful and touching revelations and we discover that, in addition to the obvious things -- marriage, love, and companionship – she is also looking for status as a married woman within the community and for the opportunity to entertain others at her own Friday night dinner table.

Don’t you feel sorry for those young haredi men on the street who keep their eyes down and are unable to look at women passersby?  Michal goes on dates arranged by matchmakers and one of the dates is with a seemingly lovely young man, but he is unable to look at her.  He explains that the woman he marries will be more beautiful because she will be the only woman he looks at!  Michal is appalled at this.

She even travels as far as Oman.  While praying and crying at the grave of Rabbi Nachman of Bratslav, a surprising experience brings her some hope.  You might think that Michal is willing to marry just about anyone, as long as he will agree to show up on the date planned, but it’s not true.  She is apparently quite careful, and turns so many men away as a result of her sense of humor, her insight and her biting tongue.

To those who remember Rama Burshtein’s award-winning debut film, Fill the Void, this is similar in that it is a feel-good story that takes place within the haredi community.  It is also about marriage and matchmaking, and it has wonderful pacing and a complex story.  This film differs from the other in that Fill the Void was a serious drama and Through the Wall is a comedy drama.  The main characters, and even some of the secondary ones, are portrayed in a compelling and in-depth manner, but some are comic characters. The script has quirky elements and you just love Michal and her sisters.

Through the Wall is available from The Match Factory.
Posted by Amy Kronish at Friday, September 23, 2016