The Role of the Ultra-Orthodox Woman

In a new documentary film, Measures of Merit, by Irit Dekel and Roni Aboulafia, we are offered a view of the world of Haredi (ultra-orthodox) women.  It is not easy being a Haredi woman.  They live in a man's world -- their lives are run by their husbands and their rabbis, they are harassed by the dayanim (judges) in the religious courts, and they have no representation in the Knesset.

This film offers a fascinating portrayal of one woman, Ruth Colian -- a woman who wants to change all that. She is a courageous and outspoken Haredi woman who is fighting for representation for Haredi women in the Knesset. 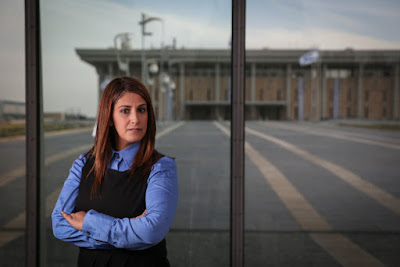 It would be a dramatic precedent for her to obtain a place in the Knesset.  The official Haredi point-of-view is that women have different roles in life from men.  Women must take care of the children, the home, and obey their husbands and their rabbis.  Otherwise, they begin to descend the dangerous slope towards assimilation.

But Ruth Colian believes that women's voices must be heard and that issues relevant specifically to women -- such as poverty, divorce, and gender issues -- are not being given fair treatment by the Haredi men who have been elected, who do not see themselves as representatives of women also.  In this film, we see Colian decide to create her own political party and to run for the Knesset, and we realize that this is not because she has a strong ego but rather she is motivated by a responsibility for the quality of her daughters' future.

In one of her speeches, she opens with: "It's more worthwhile to be silent, but more honorable to fight."

There are those who argue that it is immodest for a woman to be active in the political sphere and that her party contradicts the values of Haredi life.  But she cannot be dissuaded.

This is a film filled with drama and tension as election day approaches and our candidate works tirelessly, with virtually no budget, to get elected.