The State vs. the Individual


In 1943, approximately 875 Holocaust orphans were brought to the state-in-the-making from Poland via Teheran.  Referred to as the "Teheran children", they were quickly absorbed into the country and were an integral part of the founding generation.

Decades later, when they discover that the State of Israel has received reparations from Germany on their behalf, a small group of them decide to sue the government of Israel for what they consider to be their rightful share of the reparations.

In the documentary film, The Last Battle of the "Teheran Children" directed by Talila Frank, a group of elderly survivors come together concerning their legal case, and they find some consolation in their common cause. 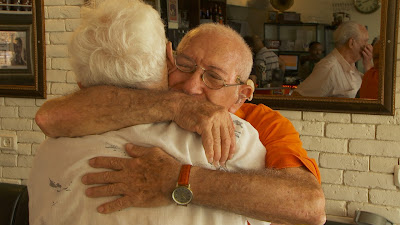 On the one hand, these people are very connected to the State.  They were part of the generation of founders and fought in the War of Independence.  Even though they say difficult things about the government and the State of Israel, they are patriotic and some of them ironically talk about how they want the emblem of the Palmach to be put on their gravestones.

Filmmaker Talila Frank, in a discussion last night at the Jerusalem Cinematheque, talked about how she worked on the film over a period of 8 years.  Her personal connection to the story is that the father of her brother-in-law is a Teheran Child who never talked about his experiences until lately.  He is featured in the film.  Frank talked about the anger of these "children" and how she identifies with their pain because they were not taken care of by the state.  She went on to talk about how these people feel abandoned by the state and therefore are experiencing a feeling of being orphaned again.

The film raises many issues concerning the life of the individual within the state.  It cannot be denied that the State of Israel did not treat Holocaust survivors in an exemplary fashion over the years.  In fact, one of the judges in the case shown in the film talks about how this case could be dangerous for the government because it could be seen as a precedent and if there is a judgment in favor of these survivors, it could open a deluge of claims by other survivors against the state.

During the discussion last night, one person in the audience spoke eloquently in favor of the choices made by the growing and developing state in its early years.  It is clear that the state needed the reparations money received from the German government to build its military capability, to build homes and schools, and to invest in a thriving economy.  On the other hand, it cannot be denied that there is much poverty, even until today, and that not enough has been done to give honor and to cover the basic needs of so many Holocaust survivors.

The Last Battle of the Teheran Children (documentary, 57 minutes) is available from Maya Weinberg (mayafilmfest@gmail.com).