Nah'che, directed by Anat Goren, is an exciting documentary film about the legendary Israeli folksong composer, Nahum Heiman (nicknamed Nah'che), winner of the Israel Prize for his contribution to Israeli folk music, a man who composed hundreds of songs, so many of which have become popular with the Israeli public.

The film opens with Nah'che at the age of 79, moving from his home to a town where they have named the town square in his honor!  The filmmaker makes use of much footage from public homages to Nah'che, and the viewer has the opportunity to see and hear so many of his songs being performed.
The film confronts his troubled relationship with his daughter, Si, herself a well-known singer.  Their professions are intertwined, yet so different.  He mainly composes.  She is a talented singer.  His genre is folk.  Hers is rock.  His style is more restrained.  Hers is passionate and strong. 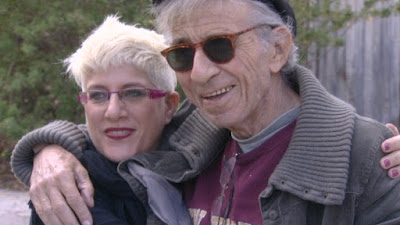 Nah'che is not a biopic in the regular sense.  Rather, it is a portrait of a man who has great charm, who has composed beautifully touching songs, a film about his joie de vivre.  This documentary film (70 minutes) is available from Maya Weinberg (mayafilmfest@gmail.com).