The Power of Music


Rock in the Red Zone by Laura Bialis is a compelling documentary film about the making of music under difficult circumstances in Sderot.  Sderot is a small town which was built in the 1950s for new immigrants and was purposefully placed on the border with Gaza, the same way that Kiryat Shmona was placed on the border with Lebanon, in an attempt to populate the land and preserve the borders.

During the last 14 years, citizens of Sderot have been living under an ongoing barrage of qassam rockets, sometimes hearing dozens of sirens a day, instilling fear and anxiety into the lives of all who live there.  It seems that music is created under unusual circumstances, and Sderot has become a city of music.  The filmmaker/narrator says, “I’d always heard that good music comes from hard places.” This is where the famous Israeli rock band Teapacks -- as well as many other musicians, young and old -- originated and developed their music.

The film provides the viewer with two parallel unrelenting experiences -- the qassam rocket attacks of many years and the music that becomes a therapeutic way for many young people in the town to deal with the situation.  These are woven together in an emotional and hard-hitting portrayal that takes you on a roller coaster ride, using real-time footage of qassam attacks, mixed with the personal stories of the musicians, and so much music!  A special focus is placed on Avi Vaknin and his stirring lyrics which are so much about the trauma and the psychological burden of living with the bombs falling.  Vaknin runs a music program for youth, where the Ethiopian singer, Hagit Yasu, is nurtured -- she eventually goes on to become a star on the Israeli TV show, Kochav Nolad (similar to American Idol).

There is also the story of Sderot itself, a town built of new  immigrants from North Africa and the Middle East.  The citizens—who  have felt abandoned and discriminated against over many decades  since they were dumped there by the ruling Askhenazi elite in the 1950s  --see the current apathy of the Ashkenazi majority in Tel Aviv as a continuation of this phenomenon. We witness them going to Tel Aviv several times to protest and create awareness of their unique situation. .  Nevertheless, they have remained loyal to their town and its culture. Asked why they just don't leave , the musicians talk about being rooted in this place and how it is part of who they are. 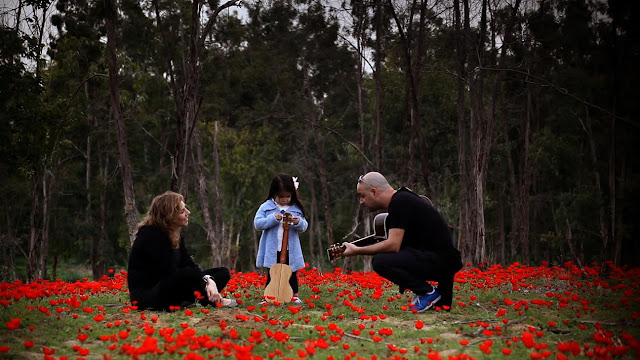 The film also includes the personal story of the filmmaker herself, a woman from Los Angeles who finds the story of Sderot compelling, goes there to make a film, and finds herself drawn to the place and  the people.  Extending her stay from three weeks to two years, she says that Sderot is a "place where you take nothing for granted."

During the discussion with the audience at a special screening last night sponsored by the Shalom Hartman Institute at the Begin Center in Jerusalem, the filmmaker discussed the politics (or lack thereof) expressed in the film.  She explained that living in Sderot and experiencing the red alerts, they felt different emotions every day.  Some days they felt bad about the children in Gaza who were suffering just as much or even more than they were, and they wanted the government to make peace.  And some days they felt that Israel just had to bomb them back!
Even though this film is essentially a human film and not an overtly political one, one cannot ignore its political undertones. The politics inherent in a film like this make the screening of the film a bit complicated.  But this filmmaker, especially in her comments after the film, expressed poignantly the ambivalence that many people in Israel and abroad feel about the ongoing bombings in Sderot , and the Israeli military reactions.  In the end, we are left with piercing questions:  After experiencing the unrelenting barrage of rocket attacks,  should we give in to our anger and clamor for more military intervention to eradicate Hamas in the Gaza Strip?  Or, since our attacks on Gaza lead to escalations in the violence as well as the nurturing of more and more terrorists, isn't it time to think of another way to resolve the problem?

Rock in the Red Zone (documentary, 87 minutes) is available from Go2Films.
Posted by Amy Kronish at Sunday, July 05, 2015