Dancing Arabs premiered at the Jerusalem Film Festival this week.  Here is a guest blog posting, written jointly by my daughters, Sari, Dahlia and Ariella Kronish and one of my sons-in-law, Josh Maudlin.

Like Kashua himself, the main character, Iyad, is from the Palestinian Israeli town of Tira. The film begins with a humorous, somewhat slapstick, portrayal of his childhood. When he nears high school age his parents decide to send him to an elitist Jewish boarding school in West Jerusalem, where most of the film takes place. As Iyad becomes independent and matures, he faces the complexities of his multi-faceted identity. 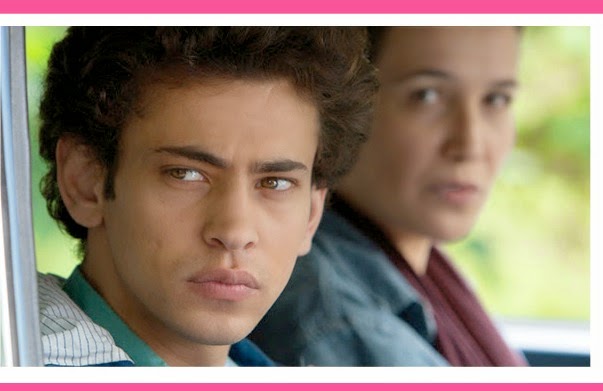 Surrounded by people who constantly mispronounce his name, Iyad finds himself in limbo between his Israeli and Palestinian identities. This dichotomy is portrayed in depth as Iyad examines his friendships and his loyalties to both sides, and it raises serious questions about the status of the Palestinians living in Israeli society today.

One of the relationships is with a young woman in his class. On the one hand, for the majority of the film, the couple is very private about their love for each other. On the other hand, the intimate sex scene transpires on a stage perhaps suggesting the very public nature of their relationship. It is not about two individuals, but about who and what they represent.

Considering the current situation (Summer 2014 - Rockets falling throughout Israel), one of the more chilling moments in the film, is the siren that is heard in Tira, while the family is gathered around the TV watching the first Gulf War and debating American involvement. The stereotyped characters run up to "dance on the roof" celebrating the retribution against the Zionist occupiers. Iyad and his mother connect over their ambivalent feelings. Here we realize that Iyad is an outsider even among his own family.

The film was planned for release in cinemas around Israel parallel to its opening at the festival. However, as Riklis himself said at the post screening Q+A: "it simply made no sense to hang up huge billboards all over the country with the phrase 'Dancing Arabs' given the present situation."

The Riklis-Kashua duo has produced a hard hitting, well-paced and important film. The excellent script, written by Kashua as a self-adaptation of two of his own books, is interpreted sensitively by Riklis, as he himself reflected: "I tried to bring sense and sensitivity to the forefront - two things we need more of around here." Kashua, on the other hand, is on his way to Chicago for a hiatus from the conflict, perhaps no different than Iyad himself who contemplates whether he will be able to make a life for himself in his homeland.

Dancing Arabs is available from The Match Factory.