Come and Meet the People of Jerusalem


Do you ever ride on a bus or train and look around, wondering what are the stories of the strangers around you?  Come and ride on the new Jerusalem light-rail and meet the people of Jerusalem! 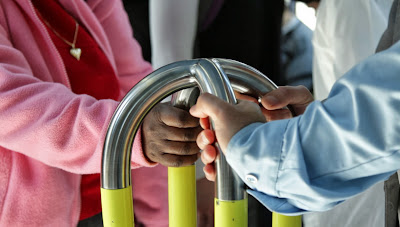 The documentary film, From Man to Man -- We Pass Like Strangers, by Daniel Gal,  is a moving and particularly compelling short film (23 minutes) about the people of Jerusalem.
The driver, who grew up in Syria, sees his train as a meeting place for the diversity of Jerusalem.   Riding with him on his train, we encounter a wide array of his passengers  and hear their stories --

A young woman who grew up ultra-orthodox and now treasures what she describes as her "freedom".  On her way to visit her family, she puts on another layer of clothes and transforms herself in front on our eyes back into her old self -- a young woman from the haredi world.

The ultra-orthodox man who was once a hippie and considered John Lennon as his prophet.

The refugee from Sudan who came to Israel because Israelis had experienced what they experienced -- they were rejected in every place.  Because of this, he had mistakenly expected that he would be welcomed here.

A woman from Sarajevo whose Muslim mother was proclaimed a Righteous Among the Nations.
These are some of the people of Jerusalem.


The documentary, From Man to Man -- We Pass Like Strangers will be screened at next week's Religion Today, a prestigious film festival in northern Italy, and is available from Go2films
Posted by Amy Kronish at Wednesday, October 02, 2013

Labels: --From Man to Man, Jerusalem