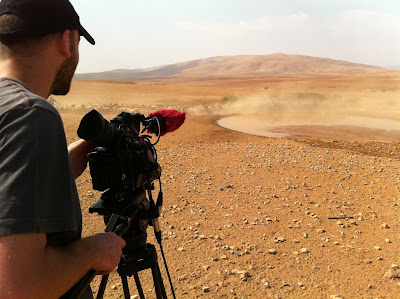 The Fading Valley, directed and produced by Irit Gal, is a documentary  look at the passive displacement of Palestinians living in the Jordan Valley, via the manipulation of water resources.

Today, living in the Jordan Valley, there are approximately 80,000 Palestinians and 10,000 Israeli settlers.  The distribution of the water resources is the opposite -- the overwhelming amount of water is for the green and lush settlements, whereas the local Palestinian farmers, shepherds and villagers live on very small amounts of water, resulting in terrible hardships.

Through intimate glimpses of the lives of individual Palestinians, filmmaker Irit Gal offers a hard-hitting look at life under the Israeli occupation.  There is systematic restriction of access to arable land by classifying it as a closed military zone and there is no free movement so that children are cut off from their schools.  Water is a natural resource, albeit somewhat scarce in this part of the world.  Yet, there is a basic human right to receive enough water for families, crops, and herds.  Not only is water not provided to the local population, but the army  is systematically keeping the Palestinians away from natural water sources.

There are some political activists who appear in the film -- from Machsom Watch, and others -- but, little is said about the overall political context.  Rather, this is a tragic human story about individuals living under military occupation.

The Fading Valley (documentary, 54 minutes) is available from Ruth Diskin.