Award-winning filmmaker Eytan Fox is best known for his films dealing with strongly delineated characters and homosexuality, incorporating a strong use of artistic design and aesthetic elements.

Born in New York in 1964, Fox immigrated to Israel with his family at a young age and grew up in Jerusalem.  He studied at the Dept. of Film and TV at Tel Aviv University.  He made two films about homosexuality in the Israeli army: Time-Off (1990), a short drama which won First Prize at the Munich Student Film Festival; Yossi and Jagger (2002), which won Honorable Mention for TV drama at the Jerusalem Film Festival.

Fox's first feature film, Song of the Siren (1994), based on the acclaimed novel by Irit LInur, was one of the most popular Israeli films of the 1990s.  His dramatic television series  Florentene (1997-99), based on the American TV series, Friends, which examines the lives of young people in Tel Aviv, won First Prize in the television category at Jerusalem (1997).  His short musical comedy, Gotta Have Heart (1997), won a prize for Best Short at the New York NewFest (1999).

His highly acclaimed and award-winning Walk on Water (2003) is a complex film about the emotional  baggage that Israeli men carry as a result of living in a society at war (see previous review on this blog). His most recent feature film, The Bubble (2006), is about the homosexual scene on Sheinkin St., about the terrible divide between Palestinians and Israelis, and the humiliations that Palestinians face on a daily basis contrasted with some of the everyday life in Tel Aviv. 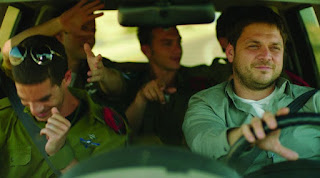 Eytan Fox's latest film, Yossi, which premiered recently at the Tribeca FIlm Festival and is currently playing in Israeli cinemas, is a sequel to Yossi and Jagger.  Ten years after Jagger died in Yossi's arms during the war in Lebanon, Yossi (Ohad Knoller) is still in the closet.  He is a cardiologist in a Tel Aviv hospital, but has not had a love relationship of any kind since his deep attachment to Jagger during his army service.  Red-eyed and haggard looking, he is desperately lonely and in need of a vacation.  Driving to Eilat for some time off, he picks up a group of soldiers, also on their way to party and vacation in Eilat.

According to Eytan Fox (interviewed on Israeli Radio Reshet Bet, last week), "I left the image of Yossi in a not very good place, and I decided to return to try to change that."  He explained that the story is a variation on his own life, on the path that he himself experienced, and also it is about how Israeli society has changed.  Ten years have gone by and Israeli society has changed, but Yossi is still stuck where he was at the end of the previous film.

Music is beautifully integrated -- as it is in all of Fox's films.  But Yossi and Jagger was a different kind of film -- produced on the background of war, it had much tension and drama.  This film is more about life and learning how to love again.  Gestures and glances are crucial elements -- rather than action and drama -- making the film more of a psychological study than a narrative film.
Watch a promo on youtube
Posted by Amy Kronish at Tuesday, May 22, 2012