My husband and I had the opportunity to view a wonderfully heartwarming documentary film last night -- Dolphin Boy by Dani Menken and Yonatan Nir.  This is a remarkable story of rebirth and hope.

Morad is a teenager from the Arab village of Kalansua, in the center of Israel, near Netanya.  He was brutally beaten by a bunch of thugs in his village and, as a result, suffered severe post-traumatic stress and became highly uncommunicative.  His behavior deteriorated as he began to display bouts of anger within his family setting.  After many standard attempts to help him, the remarkably thoughtful and humanistic doctor recommended dolphin therapy, hoping that the non-verbal communication of the dolphins would succeed where traditional verbal therapy had failed.

Here is a teenage boy who does not respond or communicate at all and slowly we watch as the dolphin therapy, his relationship with the staff of the Dolphin Reef in Eilat, the support of his father, the dedication of his doctor, the sunshine of Eilat, and the love of a young woman, all help to bring him back to learn to function normally in human society. 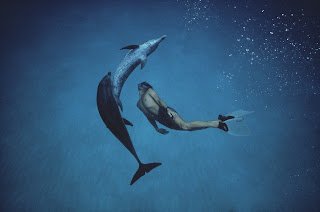 Including stunning under-water photography, this is a story of Arab-Jewish relations with no apparent political message, except that we can do wonderful things together when given the chance and when extraordinary human beings care deeply and persist in helping cure a boy who would have been otherwise written off as hopeless by many in our society.  This is  a deeply moving film about building a new life, rebirth and self-understanding.

Available from Go2Films.
[Photo by Amos Nachoum.]
Posted by Amy Kronish at Wednesday, May 02, 2012