Valley of Fortitude (Gei Oni) is Picking Up Awards 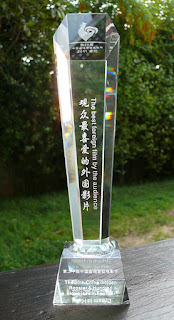 Dan Wolman's film, Valley of Fortitude (Gei Oni), based on the novel by Shulamit Lapid, has picked up 5 awards during the past year.  The most recent was received at the Golden Rooster, One Hundred Flower Film Festival in Hefei, China, which took place in October.  I am told that 40,000 people attended the opening event in a huge stadium!

Not surprising, the film won the audience award – perhaps due to its humanity, its sensitivity, and its special attention to how human beings learn to adapt to their surroundings and their relationship to nature. It is wonderful to think of far-off Chinese festival goers choosing an Israeli film that really speaks to them!

Check out more on this film, which has previously been reviewed on this blog.

Valley of Fortitude is currently playing in a TV adaptation as a 6-part series on Israeli TV Channel One, on Tuesday evenings.  Don't miss it!
Posted by Amy Kronish at Friday, December 09, 2011