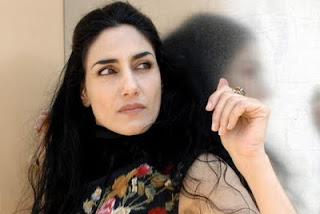 Ronit Elkabetz is an award-winning actress and film director who works both in Israel and France. Born in 1964 to a religious Moroccan family, she grew up in Beersheba (until the age of 12) and Kiryat Yam (north of Haifa). Her first role on screen was as the Lilith character in Dan Wachsmann's The Appointed and she appeared again as a woman with special powers when she played the mentally challenged sister in Shmuel Hasfari's Sh'chur, a role that won her the Israeli Academy Award (Ophir Prize) for Best Actress. She won the same award for her role in two of Israel's most acclaimed films of the last decade: Dover Kosashvilli's Late Marriage and Eran Kolirin's The Band's Visit.

Nir Bergmann's documentary film, A Stranger in Paris, provides a window into the world of this award-winning, exotic and impressive diva and captures the mystery of such a passionate woman. It is wonderful to see behind the scenes in her life and to learn how she became so successful in the acting world in Paris -- from her first acting internship to the brave step she took in putting on a one-woman theatrical show, and finally to her major roles. We learn about her work on stage, her working on her shooting schedule, her talking behind the scenes sharing her thoughts, fears and professional considerations. We meet her in her interactions with her French colleagues and in her work on the two films that she directed together with her brother, Shlomi (To Take a Wife and Seven Days).

A major scene in the film documents Ronit Elkabetz' work with French filmmaker, Brigitte Sy, who directed her in her autobiographical film, Les Main Libres (Free Hands), about a woman who is making a film at a prison where she falls in love with an inmate. At the film's premiere at the Jerusalem Cinematheque just a few months ago, Elkabetz shared with the audience details about her close and intense working relationship with the filmmaker, as she was acting in a role which represented the filmmaker's own story. This relationship is portrayed in no less an intense way in this documentary.

Elkabetz talks, with much emotion, about her childhood, about her fears and distress as a child who was different, and was worried about being accepted as different. Filmmaker Nir Bergman asks her to talk about the myth of her taking the character home with her and she explains that she draws intuition, emotion and identity from all of the parts that she has played and they stay with her. She also explains that she became a filmmaker in order to tell a story, her own story, from her own perspective, the way she sees it and that she writes the script from her subconscious, from suppressed memories.

An extraordinary film about an extraordinary personality, A Stranger in Paris is made by Nir Bergman, acclaimed Israeli feature film director of Broken Wings and the more recent, Intimate Grammar. The film is part of the series entitled Culture Heroes and is available from Ruth Diskin Films.
Posted by Amy Kronish at Tuesday, June 14, 2011