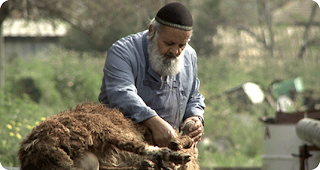 The Hangman, directed by Netalie Braun, is a powerful and complex documentary portrait of the man who was Eichmann's executioner. This is a close look at a very special man.
Shalom Nagar is a 75-year-old Yemenite, ultra-orthodox (haredi) man who makes a living as a ritual slaughterer (shochet). As a prison guard, 50 years ago, he was the one who actually pressed the button to open the floor under Eichmann at his hanging. Then he had to lift him and help to remove the body. He says that he had nightmares for a year and that, as a result, he was strengthened in his religious beliefs and he became a ritual slaughterer. It is apparent that this event helped to shape the course of his life. Shalom went on to work at the Hebron prison where he was assistant warden and was one of the founding settlers of Kiryat Arba (the Jewish settlement abutting Hebron).
But this film is about much more – it is about Shalom's very special humanity, his warm and loving personality and his charm and sense of humor. According to the filmmaker, Netalie Braun, who spoke at a symposium following the screening on March 15, 2011, at Mishkenot Sha'ananim: There is much compassion here and also a paradox. Shalom is the hangman and also the ritual slaughterer. But he states clearly: "Thou shalt not kill." Even though he is a Yemenite Jew, he saw himself as if he had been a survivor of the Holocaust, which is one of the most unique aspects of this film, since all too often it is assumed that Sephardic Jews did not see the Holocaust as part of their historical identity.
Another surprising element of his personality was elaborated upon by the filmmaker in her discussion with the audience last week. She told us that Shalom created a revolution at the Hebron prison where he was the assistant warden when he wouldn't permit the guards to beat the Arab prisoners. Also, in a very unusual step, he made special arrangements for the prisoners to cook for themselves since the food being offered was so terrible!
This film presents us with a very authentic and surprising voice of a man who had clearly seen a lot and experienced some traumatic moments in his personal life and in the life of the State of Israel. Previously, Shalom had no voice, since he was not permitted to speak out by the authorities in Israel. Moreover, as a Sephardic and ultra-orthodox Jew in Israel, he was considered to be peripheral, not only in Israeli society in general, but also in respect to the subject of the Holocaust as well as the subject of the treatment of Palestinians under Occupation. But here, in this film, he has the central platform and his humanity, compassion and charm all come through loud and clear.
This is a film about life and death seen through the unique perspective of one man. The metaphor, of course, is the prison guard or hangman who becomes the slaughterer and conducts the ceremony of kaparot before Yom Kippur, helping others with their atonement. (Kaparot is a mystical ceremony practiced by ultra-orthodox Jews in which a chicken is swung over your head, giving you a clean slate as your sins are symbolically transferred away to the chicken.)
Finally, the film has a paradoxical political twist. When the infamous Jewish doctor, Baruch Goldstein, slaughtered Muslims at prayer at the Cave of the Machpelah in Hebron on Purim in 1994, Shalom was no longer capable of living in Kiryat Arba and he moved away in protest. According to the filmmaker, his humanism should be seen in contrast to those celebrating (after Baruch Goldstein's rampage) in Kiryat Arba. This is an amazing political statement--which clearly upset some of the Jews in the audience last week in Jerusalem. Indeed, Eichmann's hangman has trouble with the massacre of Palestinians by a Jewish settler. Clearly, in his view, Jews should not behave this way after what was done to us in the Holocaust!
The Hangman was awarded the prize for best Israeli documentary at the Haifa Film Festival in 2010. Produced with support from the Rabinovich Foundation - Film Project and the Gesher Multicultural Film Fund, it is available from Hedva Goldshmidt at Go2Films.