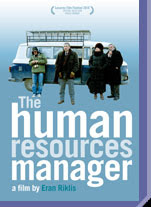 Riklis is a local filmmaker who has made himself a reputation internationally with Cup Final, Syrian Bride and The Lemon Tree. This time his film is a literary adaptation, based on a novel by A.B. Yehoshua (called Woman of Jerusalem), script by Noah Stollman (who also wrote the script for Someone to Run With).

The film, which tells the story of a form of personal atonement for how we treat foreign workers in our midst, will open to the Israeli public after the holiday of Succot.
Posted by Amy Kronish at Wednesday, September 22, 2010