When Health Care and Politics Come Together

This year seems to be the year for films about how Palestinians from Gaza and the West Bank access health care in Israel. The basic story is that health care is not up to par in Palestinian hospitals and therefore the Israeli health system steps up to the challenge of treating individuals who come from Palestine -- even without health insurance benefits. It's not enough that these individuals are undergoing a personal trauma because of their medical issues, but they are put through considerable hoops in their attempt to receive medical treatment.

There are two sides to this story. The films show the bureaucracy on the Palestinian side, the long waits and humiliations at the checkpoints, and the terrible fact that the Israeli security forces are doing everything in their power to make it almost impossible to enter Israel for medical treatment. The good news, however, is that Israeli hospitals and non-profit organizations are moving mountains to help these people and the numerous stories that are being told can bring tears to your eyes.

There are two new major documentary films and one animation:

Precious Life, directed by Shlomi Eldar, 90 minutes. The film tells the story of a baby from Gaza lacking an immune system and documents the personal fight that his very brave and articulate mother wages for his medical treatment. Available from Origami, yoav@jasmine.tv

My name is Ahlam, directed by Rima Essa, 75 minutes. Available on the HOT VOD channel. The film portrays the last six months in the life of Ahlam from Hebron, who is a little girl with leukemia.

On this same subject of accessing health care within Israel, I was very impressed with an animated film, which I saw at the Jerusalem Film Festival --
Fatenah, directed by Ahmad Habash, Palestine, 2009, animated, 30 minutes. 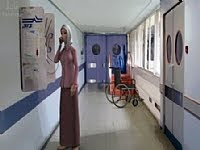 Available from the World Health Organization, Geneva. This is an extremely well-made animated story of a 28-year-old woman from the Gaza Strip who lives with her father and sister, and is planning to marry soon. When a lump is discovered in her breast, she goes to the local doctors who don't seem to know anything. It's not enough that she is undergoing terrible emotional stress, surgery and chemotherapy, but she also suffers at the hands of the bureaucrats, at the hands of poor medical professionals in Gaza, and at the hands of the soldiers at the Erez crossing into Israel. She is helped however by Israeli activists in the non-profit organization, Physicians for Human Rights, who assist her in obtaining a permit to go to Tel Hashomer for treatment. Notwithstanding the fact that the film is animated, it is surprisingly human and sensitive!
Posted by Amy Kronish at Thursday, August 05, 2010

Is the film "Precious Life" available for viewing on DVD in the USA?
Jay Rosenbaum
rabbi@h-nt.org

The film "Precious Life" will be seen at film festivals. In the meantime, if you do film programming, you can request a DVD for preview from yoav@jasmine.tv.