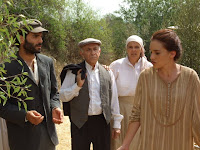 A new artistic film by Dan Wolman premiered at the Jerusalem Film Festival last week. I have written about Wolman's films many times on this blog – his early films: The Dreamer, Floch, My Michael and Hide and Seek; also his later films: Foreign Sister, The Distance and Tied Hands. His latest film, Gei Oni – Valley of Fortitude, is based on the best-selling novel by Shulamit Lapid.

A period piece, the story takes place during the late 19th century, a period of Jewish history in which waves of Jewish migration left Russia and the Ukraine, mostly for America. A smaller number of immigrants went to Palestine.

Combining the historical narrative with a love story, the film tells the story of Fanya, a young woman who arrives on the shores of Palestine with a little baby, accompanied by her aging uncle and her emotionally scarred brother. They are running from Russia, having lost all of their family in a terrible pogrom.

Yehiel, a pioneering farmer from a tiny northern village near Safed has recently lost his wife to malaria and is looking for a mother for his two little children. Fanya has no real choice and although she is harboring a terrible secret she agrees to the arrangement. Through the warmth of their welcoming neighbors, through her growing connection to their life of cultivating the land and through the love of Yehiel, she is able to rebuild her life and cultivate her capacity to love.

This period piece beautifully reflects the period which it portrays. It is slow-paced, yet sensitive, beautifully directed and acted, and a true pleasure to watch – a small piece of Jewish history.

The film is available from Dan Wolman at danwol@zahav.net.il
Posted by Amy Kronish at Monday, July 19, 2010