When is a name more than a name?

These are My Names, by Ruth Mason and Naomi Miller Altaraz, is a brief look at the importance and meanings of the names of the Jews who came from Ethiopia. Their names carry blessings, family stories, and links to the grandparents that were left behind, and they have multiple names which reflect the richness of their culture. We meet Prince, Flowers of Paradise, Prized Possession and others.

The film offers interviews with many young Ethiopian Jews talking about the names they were given by their parents, how their names were changed by absorption officials and educators when they came to Israel, the importance of their names, some talking about the trek from Ethiopia to Sudan. 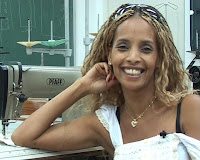 Zoe (seen in the photo) is a compelling and articulate woman, a clothing designer, who shares her memories of the terrible trek, and provocatively asks, what was it all for?

Watch a trailer of the film!

This is a short film (30 minutes) which might prove effective if programmed together with another documentary which can add much drama and emotion, such as The Name My Mother Gave Me. Both films are available from Ruth Diskin Films.
Posted by Amy Kronish at Friday, April 02, 2010

Labels: --Name My Mother Gave Me, --These Are My Names, Jews from Ethiopia