Haredi Jews, the Internet, the Rabbi's Daughter and the Midwife

Haredim: The Ultra-Orthodox Community in Israel is a documentary trilogy directed by Ron Ofer and Yochai Hakak, produced by Belfilms for broadcast on Keshet (Channel 2). This series can do a tremendous amount for bridging the gap that divides us from the ultra-orthodox world.

Two of the films in the trilogy caught my attention this week.

The concluding film in the series, Religion.Com (2009), was premiered at the Jewish Film Festival run by the Jerusalem Cinematheque. This festival (which I founded 11 years ago) is a delightful way to celebrate Chanukah, offering an eclectic mix of films and events – from premieres to new archival finds, from student shorts to full features, from film footage to panel discussions, with guests from dozens of countries.

Religion.Com is about two men in the “haredi” (ultra-orthodox) community – one uses the internet and media in his work running a large and successful advertising agency, the other is fanatically working against the internet becoming part of everyday life in the haredi world. One believes in freedom of expression, the other believes that the internet threatens haredi society from within. Both men are charming and articulate in opening up to the camera and exposing their lives, their beliefs and their inner selves. In fact, the mixed audience of secular and religious Jews were equally fascinated and appreciative of these two charismatic men, who had so much to share with all of us.

This film, which was made by secular filmmakers, revealed an amazing amount of sensitivity to and understanding of the issues which the ultra-orthodox world faces in confronting modernity in contemporary Israel. Not only that, but one of the directors of the film, Ron Ofer, who spoke after the screening, said that the issue of putting limits on the use of internet is an issue we all face in Israeli society, so that the central issue of the film is not limited to orthodox Jews.

The second film in the trilogy, Haredot - The Rabbi's Daughter and the Midwife (2008), is about two extraordinary haredi women making change in their community from within -- Rabbi Ovadia Yosef"s daughter Adina Bar-Shalom has opened a college for haredim and Rachel Shelkovski, known as Bambi, runs a charity for poor families, and is a midwife at S 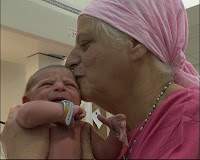 Adina ran a dress salon for many years, but when she decided that it was important to involve haredim in everything in society by encouraging them to study, instead of keeping them segregated and on the outside, she made the radical decision to open the college. Just this week, new and permanent premises for this college were dedicated in Jerusalem.

The two women work hard to improve life in their communities. Bambi, the midwife, is working against the reality that so many haredi women have 12 – 15 children and support their families, while the husbands study Torah, all of which results in so much poverty.

The film provides insight into the lives and families of these two articulate ultra-orthodox women, their family histories, what motivates them, and what makes them such fervent and dedicated women out to make a difference in the haredi world.

The series was produced with funding from the Avi Chai Foundation, the Gesher Fund for Multi-Cultural Film and Keshet and is available from Go2Films
Posted by Amy Kronish at Wednesday, December 16, 2009