Far from the Crowd

People often ask me for films that deal with life in the development towns. Some of the best films in this category would be the following, all of which are stories of women, some have been reviewed on this blog: Turn Left at the End of the World (feature film), HaMakom (short drama) and Fata Morgana (documentary).

I would like to add to the list a compelling TV drama, directed and scripted by David Deri, called Until Tomorrow Comes (2004), which tells the story of three generations of Israeli women, all from the same family, living in Yerucham, a small town in the northern Negev.

The drama portrays real-life issues for these women, including grappling with the difficult decision about whether to put grandma in a home for the elderly, how to soothe the nerves of a young bride, and how there can be room in your life to love again. 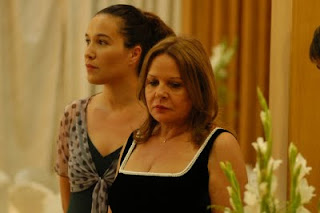 Three generations of women – a tale of loneliness, widowhood, and impending divorce combined with warmth, empathy and compassion.

Aisha, the aging grandmother at beginning stages of Alzheimer, represents the immigrant generation. She has never quite acclimated to life in Israel. Constantly looking back on her life in Morocco, she especially misses her now long-gone husband. Lillian, her daughter is shouldering the responsibility for the family ever since her husband passed away 12 years ago. She runs a bridal salon and is being romantically pursued by the local chief of police. Her grown daughter, Etti, is "temporarily" living at home with her mother, having recently decided to leave her husband. The mother and daughter are played by a distinguished mother and daughter team of professional actresses – Raymonde and Yael Abecassis.

Until Tomorrow Comes (50 minutes) is available from the producer, Eran Riklis, at eriklis@netvision.net.il or contact the filmmaker directly, David Deri, david_deri@walla.com
Posted by Amy Kronish at Tuesday, October 13, 2009