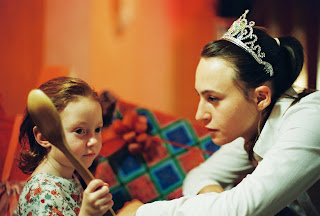 Jellyfish, directed by Shira Gefen and Etgar Keret (a husband and wife team), 2008, is a quirky and complex film, which was very well received in Israel. Etgar Keret is one of Israel’s most creative and popular young writers and his short stories are widely read. The film won the prestigious Camera D'or at the 2007 Cannes Festival.

The film is a comment on marriage, memory, alienation in the urban setting, and unfulfilled promises.

The story is about Batya, a grown woman living in Tel Aviv, who is remembering a trauma of her childhood – her parents’ divorce and their unfulfilled promises to her (as represented by the ice cream man). The little girl represents Batya herself, holding onto her childhood memories like a life preserver. In fact, her friend the photographer says that her parents are survivors; we are all second generation. What does this mean? We are all living with memory of one kind or another, in this case, with trauma about relationships between parents and children. In fact, most of the film is about the relationships between parents and children.

Eventually, Batya finally succeeds in letting go of her traumatic memories. As she is reborn in the water and saved by her friend, she smiles up at the heavens, and we realize that she will now be able to move on.

The film has a very strong motif of water – Batya’s childhood trauma was at the seashore and she is reborn in the womb of the sea as she lets go of her memory. Other strong scenes with water include: the realistic waterfall with water running which is a picture hanging on the wall; the water dripping in Batya’s apartment, representing alienation and lack of rootedness; the newlyweds who desperately want to see the sea which is a metaphor for yearning for happiness and for seeing beyond our small and circumscribed lives.

Last week, I appeared on a panel with Miri Talmon, who teaches at the Univ. of Wisconsin (Madison). Together, we introduced and led a discussion following the screening of this film. According to Miri, the film is an enigmatic one about alienation and homelessness in the global world. The title of the film, Jellyfish, refers to the beautiful seashore, with disgusting jellyfish on the sand. Miri explains that life is beautiful only in a cliché. Real life in a post modern world, however, sucks.

Jellyfish is available from Zeitgeist
Posted by Amy Kronish at Monday, May 18, 2009

It is worth mentioning that the film had won the Cannes festival 2007 Camera D'ore: Arguebly the most prestigous film an Israeli film had ever won.