To whom do we answer? To what authority? To the institutions of the democratic state or to a higher authority? 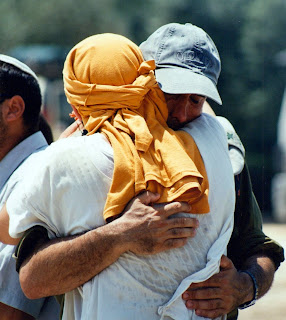 Recently, there has been much discussed both in the press and on TV about hard-core settlers at illegal outposts on the West Bank. The discussions have arisen out of two recent incidents – the attempted assassination of a left-wing professor, and the clashes between settlers and the army, with the settlers slashing tires of army vehicles, attacking Palestinians and preventing the army from protecting Palestinian property.

Even though the necessity of a two-state solution seems to have entered our public consciousness, it seems relatively certain that an attempt at evacuating and dismantling settlements would rip our country apart. Supporters of the settlers give "security" and "the sacred land of the Bible" as two reasons for not giving up territory on the West Bank. On the other hand, supporters of the two-state solution seem painfully aware of the tragedy of the occupation and the ongoing price that we pay unless we reach a peace agreement with our neighbors.

Just a few years ago, the Israeli police and army successfully evacuated the settlements of Gush Katif, in what was called "the disengagement". A human and emotional look at the turmoil of the disengagement can be seen in the documentary film, Storm of Emotions סערת רגשות ,directed by Yael Klopmann (83 min., 2007). The film includes a fascinating section on the simulation training and role-playing that the police and army underwent in preparation for the disengagement. Their readiness was thorough.

One police officer talks about having thought about hiding his kipah during the evacuation, because of the conflict it would cause with the religious settlers. Then he decides to wear it proudly. Another police officer sits on the beach and talks to his sons about the importance of following orders.

The dangers are enormous in a democratic state in which the citizens answer to a "higher" authority, as represented by their rabbis – we saw this with the assassination of Prime Minister Yitzhak Rabin, when a yeshiva student claimed that his rabbi's injunction against evacuating settlements justified his killing the prime minister. We see this in Joseph Cedar's film, Time of Favor, in which two young men are carried away in what they think is a legally justified interpretation of their charismatic rabbi's teachings.

One of the fundamental principles of living in a democratic society is respect for the rule of law, otherwise democracy can quickly turn into anarchy. When the army and the police are given a complex mission, and they are permitted to do their jobs right, with humanity and caring, then the outcome can be favorable for the vast majority of the country – as we saw during the period of the disengagement.

Storm of Emotions is available from Ruth Diskin, ruth@ruthfilms.com
Posted by Amy Kronish at Wednesday, October 08, 2008