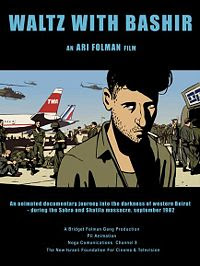 Ari Folman is a brilliant filmmaker. He directed and scripted (together with Ori Sivan) the critically acclaimed Saint Clara. Here, he combines animation with full-length documentary in order to examine issues of memory, trauma and guilt that arise during wartime, and the film received a lot of attention at Cannes (May 2008).

Boaz is pursued in his dreams by 26 ferocious dogs. He recalls that when his tank squadron entered Lebanese villages at night, looking for terrorists, the dogs would bark and this would provide the terrorists with an advance warning that would help them get away. So, his job was to silence the dogs. He killed 26 dogs this way.

Now, more than 20 years later, filmmaker Ori Folman is also haunted by his memories of that war. He goes looking for his friends, to find out more about where they were and what they experienced during that war, and especially where they were that terrible night – the night of the Sabra and Shatilla massacre. He talks to his friend and co-filmmaker, Ori Sivan, as a friendly therapist, and to Ron Ishai, the journalist, who himself was there in Beirut at that time. One of his friends has run away to Holland, to a brutally stark and frozen landscape, far from reality. Another of his friends tells the story of his close escape, swimming south along the coast, trying to hook up with his platoon which deserted him in battle. And Folman himself is unable to shake the recurrent dream of naked Israeli soldiers getting up out of the waters of the Mediterranean and walking into Beirut. All of this graphically portrayed through animation.

Wartime includes so much destruction of life and property, so much indiscriminate killing. What can it possibly solve?

1982 War in Lebanon. Israel was fighting in Lebanon on the side of the Lebanese Christian Phalangists. Their leader, Bashir Gemayel, had only recently been chosen by the Lebanese Parliament as president of the Lebanese Republic, when he was murdered. In order to exact their revenge for this murder, the Phalangists chose one night during September 1982 and went into the Sabra and Shatilla refugee camps in West Beirut and massacred men and women and children, hundreds, maybe even thousands of Palestinians. The Israeli troops were located outside the camps, but were indirectly involved in the massacre, as was clearly documented in the Kahn Commission of Investigation (which led to the resignation of Ariel Sharon, then Defense Minister).

During the days following the massacre, I went –together with 400,000 Israelis -- to an enormous demonstration in Malchei Yisrael Square in Tel Aviv (later to be known as Rabin Square) to protest the role that the Israeli military played in this massacre. Ari Folman and his army buddies remember being there in Beirut, that night of the massacre. They were there, standing by, permitting the cruel and savage Phalangists to carry out their massacre. No wonder Ari Folman is suffering from nightmares and his friends are complaining of terrible memories till this day.

We were all emotionally involved in the second Lebanon War of two years ago. This film brings us back to the first one, which had been buried deep in our subconscious. That war lasted 18 years. And what did it achieve?

Watch a clip from Waltz with Bashir on youtube.

Additional recommended films about the futility, indiscriminate killing, and the traumas that were placed so heavily on the souls of our soldiers during the years of the War in Lebanon – Eli Cohen's Ricochets; Haim Bouzaglo's Time of the Cherries; Eran Riklis' Cup Final and most recently, Joseph Cedar's Beaufort (based on the book by Ron Leshem).
Posted by Amy Kronish at Sunday, July 27, 2008

Labels: --Waltz with Bashir, futility of war, War in Lebanon

I wrote a post dealing with the same film on the same day! Except yours is much better...

great blog! I wish i had more access to Israeli films here in Australia... I am dying to see Shiva. I have to wait patiently for the israeli film festival that comes around once a year :)